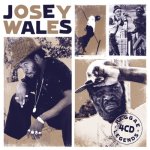 Josey Wales – the main rival to Yellowman in the early 80’s – has been awarded a Reggae Legends box set, courtesy of Greensleeves records. This includes four albums – The Outlaw Josey Wales (1983), No Way Better Than Yard (1983), Two Giants Clash (1984) and Undercover Lover (1985).

All albums are nice efforts, but my particular favourites are No Way Better Than Yard, produced by Michael “Pep” Chin, and Undercover Lover, produced by George Phang. These two sets differ a lot from each other though. The first has a more roots oriented vibe, while the latter has pulsating, early digital riddims courtesy of the Taxi Gang.

Two Giants Clash is famous for its great art work by Tony McDermott and because it was a clash between the most acclaimed deejays in the early 80’s. The production is credited to Henry “Junjo” Lawes and is backed by tough riddims from his usual suspects – Roots Radics.

In my opinion, Yellowman won the clash, but Josey Wales proved to be the more consistent of the two and remained popular throughout the 80’s, partly due to his work with King Jammy.

This box set is sold a at bargain price and is easily worth the money. But, as with the Johnny Osbourne box set, it lacks information. No sleeve notes, just credits. It’s a pity for all of us that really thirst for information.

One response to “Josey Wales is awarded Reggae Legend”