Jah Soldier is a hidden gem 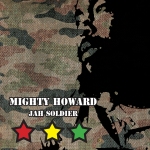 Some months ago I had some credits left on my eMusic account and didn’t really know what to do with them. I wandered the site and stumbled upon Jah Soldier by U.S. born singer Mighty Howard, whose name I recognized since I’m a big fan of the EP The Berlin Sessions released in January this year.

I downloaded the album and immediately forgot all about it. This happens to me all the time when I’m acquiring lots of mp3 files at the same time.

Some weeks ago I was looking through purchased albums, noticed Jah Soldier and gave it some space on my iPod. On my way to work the next day I was blown away.

Mighty Howard’s pleading voice kept me company for the rest of the week.

On Jah Soldier Mighty Howard shows many sides of himself. But the album is mainly dark, dreamy and has an air of Lee Perry’s finest moments at times. This suits Mighty Howard’s fire and brimstone lyrics well. Producers Aldubb and Dubmatix have undeniably done a great work on these often hard and electronic riddims.

However, some tunes stand out of the darkness that embraces Jah Soldier. Rock the Night with its sing a long chorus and Home, an acoustic tune that could have been voiced by Jason Mraz.

One tune – the haunting Meditation – is accompanied by its dub counterpart. It’s sad that the dubs to Warrior Call, Mount Zion and Rock the Night aren’t included. These can instead be found on The Berlin Sessions.

Jah Soldier is Mighty Howard’s full length debut and has not been widely promoted. That’s a shame. Because Mighty Howard’s moving singing and conscious lyrics deserve to be heard.

2 responses to “Jah Soldier is a hidden gem”