Takana Zion is the Guinean singjay sensation that went to Jamaica and recorded his third full length album Rasta Goverment at the legendary Harry J studio together with producers Samuel Clayton and Stephen Stewart.

Takana Zion was born in Guinea in West Africa. By the age of 17 he left his family and moved to Mali without saying goodbye. In an e-mail to Reggaemani Takana Zion explains why:

“They never do me wrong, but I wanted to be free and live my life. They are Muslim and my young faith was a problem for them and at the same time I was tired to see my mother spending her money on my school fees while I was chanting and praying king Selassie I God at the beach.”

Prior to Takana Zion, artists such as Ivoirians Alpha Blondy and Tiken Jah Fakoly, as well as the late South African singer Lucky Dube, have done a lot to promote African reggae.

According to Takana Zion, Guinea is also a country with a lot of talent and a strong musical culture.

“Trust me that it influenced me a lot. Yes, I can sing any traditional music from Guinea,” he reveals.

Two unreleased albums
While he lived in Mali he met Tiken Jah Fakoly, for whom he also recorded two albums, both yet to be released.

“The project was called back to Zion, but Tiken Jah is very busy with his own music, so it couldn’t be released. I didn’t want to waste my time, I wanted to learn and progress in music. I had to find food for myself being young (19 that time), and far from my family,” he explains, and continues:

“We don’t have plans to put them on market now that I start to get busy too.”

Shifted producer
His first albums that have been put out – Zion Prophet and Rappel a L’Ordre – were produced together with Manjul, a French producer nowadays based in Mali. For Rasta Government he instead teamed up with Jamaican producers Samuel Clayton and Stephen Stewart.

“I made two albums with Manjul, and it was a good experience for me. But as you know, in the process of development there is no limit, so working with Samuel and Stephen was the next level of experience. They know a lot of things in the music that will help me. They choose musicians and everything for this album. Their efforts are felt in it.” 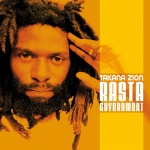 Rasta Government is strictly roots and, according to Takana Zion, all about high level consciousness, justice and  peace for one and all.

“This album is like the rebirth of the original reggae that existed before,” he writes, and continues:

“We made a progress in the message and the music and I am satisfied.”

The Almighty lyricist
The lyrics are – just as on his previous albums – sung in several different languages. Eight out of ten songs are in English, one in Sousou and one in Manding. And where do his lyrics come from?

“I don’t write lyrics. I would say it’s almighty himself that tell me what to sing and how to sing it.”

Rasta government shall rule the world
Takana Zion explains that Rasta Government differs from his previous albums due to many reasons. The most obvious are the location of the production and the use of veteran Jamaican musicians, such as Sly Dunbar, Robbie Lynn and Dalton Brownie.

“Kingston is the capital of reggae, so if you know what you want in your music, you will surely get it. The musicians them know from what they hear in your way of singing which kind of spirit you are getting,” he explains.

Takana Zion seems tired of the public image of Rastafari, and with the title Rasta Government he wants to show that Rasta is more than smoking weed and singing.

“Rasta is a lot of things, and thing is, if Rasta men can be the greatest artist, they can also be the greatest leaders and everything they want. It’s a prophecy that Rasta government shall rule the world. Just wait and see.”

One response to “Takana Zion calls for a Rasta government”