In the press material for the first release on the newly established King Spinna label – founded by Bob Harding and Dom Sotgiu from the legendary Blood and Fire Records – it is stated that the market is saturated with albums of Bunny Lee produced dubs from King Tubby’s studio. That’s no exaggeration to say the least.

And that is why it is a sheer joy to listen to King Spinna’s Dub will Change Your Mind. Here is an album with genuine rarities never compiled on 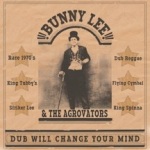 It is concentrated around the period 1974 to 1978 and highlights the funky flying cymbals style pioneered by drummer Carlton “Santa” Davis. Throughout, the tough riddims supplied by The Agrovators are superbly rearranged with echo, reverb and delay by the talented engineer(s) at King Tubby’s studio.

King Spinna certainly follows in the great Blood and Fire tradition and offers sublime music that many people didn’t even know existed until now. Almost not Bunny Lee himself as stated in the press material.

Dub will Change Your Mind is initially released on vinyl in a pressing limited to 1,000 copies. Subject to demand a CD issue will follow featuring three bonus tracks. All tracks are currently also available for download from via the King Spinna website.