Ras Batch is a powerful exponent of roots reggae 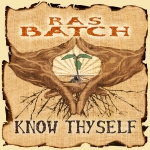 On Ras Batch’s seventh album Know Thyself he has teamed up with producer Laurent “Tippy I” Alfred from I Grade Records and the Zion I Kings, adding Andrew “Moon” Bain from Lustre Kings and David “Jah D” Goldfine from Zion High Productions to the team of arrangers and producers.

Ras Batch is a prolific figure in the rich and vibrant Virgin Islands reggae movement, and has via his label Sound V.I.Zion Records released albums from himself and others. Apart from running a label he is also a producer and a musician playing drums, keys and bass.

Know Thyself is an organic and crisply produced set with a handful of already classic Tippy I riddims, and includes Jamaican musicians Leroy “Horsemouth” Wallace on drums, Dean Fraser on saxophone, Andrew “Bassie” Campbell on bass and Earl “Chinna” Smith on guitar.

Song titles such as Give Jah Thanks for Life, Trees and Dem Against Jah Rules tell of a strictly conscious affair dealing with topics such as religion, slavery, love and unity as well as environmental issues.

Ras Batch is a powerful exponent of contemporary roots reggae and has an honest and soaring tone in his voice. He occasionally lacks pitch control, something he makes up for in sincerity and emotional intensity.

Highlights include album opener Jah Children, something of an ode to nyabinghi drumming, Live Pray with its instant and memorable guitar hook courtesy of Chinna Smith and the first single Together, with a positive and infectious sing-a-long chorus.

Ras Batch might not be as well-known as fellow VI artists Pressure and Midnite, but with the rich and emotive Know Thyself he might be able to tell the world his story and put his name on the map.

Know Thyself is now available on CD and digital download.