Jacob Hemphill from SOJA is all about brainwashing

U.S. reggae band SOJA’s front man and lead singer Jacob Hemphill struggles to save the world. He packages his music in a neat and sweet wrapping paper, but the inside is sour since the lyrics often deal with tough issues such as the environment and the many problems the human race is facing.

As the son of a former IMF representative he has politics and economics in his blood, and when he and his family lived in Liberia in the 80’s he experienced war on first-hand basis, an experience that has shaped him as a person. 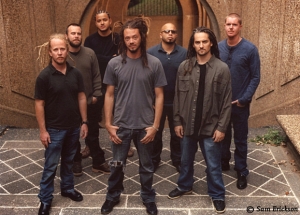 SOJA with lead singer Jacob Hemphill in the middle.

SOJA’s latest album is called Strength to Survive and was released in January in the U.S. and in October in the rest of the world. It was produced together with mainstream pop producer John Alegia, who has previously worked with Dave Matthews Band, John Mayer and Jason Mraz.

Compared to previous SOJA albums this one is the most pop influenced yet, even though they have had the same formula from the scratch.

I got a chat with Jacob Hemphill when the band was on a European tour and we talked about politics, Strength to Survive and why oil is the greatest threat to mankind. Check the full story over at United Reggae.