Heartical and BDF rock for freedom 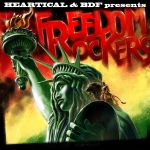 Basque Dub Foundation’s (BDF) Inyaki Yarritu has together with Heartical’s Sergio Marigomez come up with a new and fresh riddim called Freedom Rockers. It’s the second riddim they have done together and follows the acclaimed Ministerio Del Dub, a riddim that featured cuts from the late and great Alton Ellis and Sugar Minott.

Freedom Rockers comes with no less than twelve previously unreleased vocal cuts and one dub version. The global line-up includes artists from five countries, for example David Hinds from the UK, Zareb from Jamaica, Rootsmala from Spain, KG Man from Italy and Guive & Professor Liv’High from France.

Loving all the cuts on this rocking riddim, but especially interesting is Carlton Livinston’s and A State of Mind’s Higher Horse, where the UK rap trio nicely interacts with the sweet voiced Jamaican veteran singer.

Available now on 7” and on digital platforms.