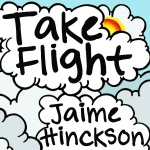 Was recently recommended to have a listen to U.S. reggae/jazz piano maestro Jaime Hinckson’s instrumental debut album Take Flight, released late last year. And it was certainly a pleasure to my ears.

Jaime Hinckson was introduced to classical piano at the age of seven through his piano teacher Miss Mac, referred to as an angel in disguise on his website. She later introduced him to Leslie Butler, a piano wiz that helped him to bridge the gap between classical music and contemporary jazz. Born in Miami to Jamaican parents, reggae was in his blood.

On Take Flight he cleverly covers old classics such as Bob Marley’s Waiting in Vain, Ken Boothe’s Moving Away, Michael Jackson’s Human Nature and The Maytal’s 54-46 Was My Number, but also more contemporary hit songs like John Legend’s Ordinary People and Bruno Mars’ When I Was Your Man.

The piano-driven and airy music is sparsely arranged with only drums, bass and guitar. A number of tracks however also include horns. The piano does most of the talking and drives the melody forward. It’s as much a jazz album as it’s a reggae album and today you don’t come across that mix often enough. Definately well worth checking out. Visit Jaime Hinckson’s website for a free listen to all of the tracks.