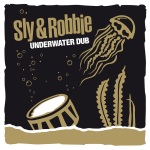 World-renowned riddim duo Sly & Robbie have been involved in countless of dub albums – as studio musicians, producers and mixing engineers. For a number of years they kept a low profile, but it in 2012 the returned to the spotlight with Blackwood Dub, recorded together with producer Alberto Blackwood.

Focus is on drums and bass. And these two essentials are drenched with unusual sound effects and some studio wizardry with lots of echo and reverb. It’s slow and monotonous, and non-dub heads might find this release strange, or odd even, but for me it’s a real treat. Turn up the bass – the riddims twins are in full effect.