Sceptre’s long lost debut has stood the test of time 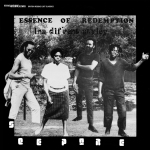 In retrospect it’s interesting to note which albums that broke big and which didn’t. It often has to do with financing; distribution and marketing. Or maybe the circumstances surrounding the release weren’t right. Or the market wasn’t ready for the sound. Or the sound was regarded as outdated at the time.

The latter may have been at least one of the problems why Sceptre’s debut Essence of Redemption Ina Dif’rent Styley didn’t break at the time of its release. The interest for deep roots reggae in the mid-80s wasn’t huge. Dancehall and slick lovers rock ruled the scene at the time.

Fortunately the reggae champions over at Reggae Archive Records have a mission to reissue long lost UK roots dating from the late 70s to the mid-80s. And they have now dusted off this gem.

Sceptre was founded in 1981 in Birmingham and dropped Essence of Redemption Ina Dif’rent Styley in 1984. It’s a strong set with six out of ten tracks being essential early UK roots. Get up And Go is more on a funky tip, while the three remaining cuts lean more toward lovers rock with Jean McLean singing lead vocals.

It’s certainly a versatile set that has stood the test of time.