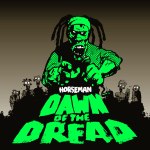 This year has so far been graced by remarkably strong dancehall albums, and Popcaan and Jah Vinci’s debut albums are two prime examples. Horseman’s recently released debut is another. These three albums are something completely different compared to all the generic and poorly mastered dancehall sets that are regularly put out.

Horseman is a veteran on the UK reggae scene and has spent about three decades working largely behind the scenes, often as a very capable and well-respected drummer. He has over the past few years made solid guest appearances on several productions coming from Prince Fatty.

And Prince Fatty is also responsible for production and mixing on Horseman’s debut album Dawn of the Dread. This album sees Prince Fatty taking a new direction. It’s still vintage sounding though, but not vintage as in 60s and 70s. No, Dawn of the Dread is primarily rooted in the mid to late 80s dancehall scene. Bouncing bass lines, playful drums and lively synths make this twelve track set a joyous and fun excursion, an excursion on which Horseman and Prince Fatty have invited Tippa Irie, Winston Reedy and Earl Sixteen.

I’ve actually been longing for a full album from Horseman ever since I heard Prince Fatty’s excellent album Supersize four years ago. And this album was well worth the wait.

One response to “Scary good from Horseman”