Time to sum up this year’s best albums. Last year I made a list collecting 25 sets, but this year I aimed for 30, and succeeded. As usual no reissues or compilations were allowed.

This year’s list is however a little bit different compared to previous lists. Why? I have included two straight dub albums. And it could actually have been no less than four dub sets, but Natural Numbers’ Natural Numbers in Dub and The Lions’ This Generation in Dub, the roaring dub counterpart to their beautiful This Generation, didn’t make the final cut. 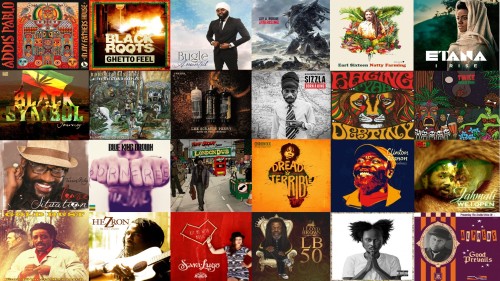 The list below collects 30 roots, ska, rocksteady, dub and dancehall albums in no particular order. If you’re curious about the albums – check out my Spotify playlist with all but two sets. Download the playlist here. Enjoy!

Jahmali – We I Open
We I Open equals sun-burnt skin, sand between your toes and salty hair. A cheerful contemporary rub-a-dub set with lots of light to wash your troubles away.

Black Roots – Ghetto Feel
Deep and profound vintage roots reggae. This album could easily have been released in the early 80s.

Sly & Robbie – Dubrising
Heavy as lead, yet melodic and refined, and with adventurous dub mixing by the legendary Paul “Groucho” Smykle.

Etana – I Rise
Another excellent set from one of Jamaica’s leading voices. A set that effortlessly blends infectious love ballads and tough roots anthems.

Sara Lugo – Hit Me with Music
Bright and positive from start to finish. Sara Lugo explores the gentle side of reggae with influences from soul, jazz and light electronic pop.

Lloyd Brown – LB 50
Yet another harmonious set from one of most reliable and hardest working artists in the reggae industry.

Popcaan – Where We Come From
A remarkable, exceptional and unique dancehall effort that hopefully can start a new trend in the otherwise very busy and non-consistent dancehall industry.

Raging Fyah – Destiny
The melodies and the arrangements are beautiful and it’s impossible not to get struck by a sweet piano ballad like Brave or pulsating non-stop rocking rockers like Barriers and Step Outta Babylon.

Hezron – The Life I Live(d)
Hezron’s debut album, but it sounds mature, partly because of the well-produced riddims by some of Jamaica’s finest, and partly because he sings like he has never done anything else in his life.

Lee Perry – Back on the Controls
A dark and dense album showcasing Lee Perry’s signature style.

Soul Majestic – Setting the Tone
With its angelic vocal harmonizing and alternating male and female lead vocals – this is a sublime, beautiful and uplifting album.

Hollie Cook – Twice
Nine tracks and over 40 minutes of discofied reggae in its greatest form. Free your mind, take off your shoes and hang on, this is a rollercoaster into dreamy territory.

Bugle – Anointed
Probably best known for singles like Doh, What I’m I Gonna Do, Journey and Don’t Give Up, and if you dig those you’ll love this album.

Sizzla – Born a King
Wickedly well-produced, balanced and detailed. This scorching album is definitely one of the strongest sets from Sizzla’s more than extensive catalogue.

Alpheus – Good Prevails
Skip the poorly sounding rocksteady reissues and go for this meticulously constructed and well-produced set. This is the sound of real reggae music.

Chronixx – Dread & Terrible
Solid debut set from this youthful and passionate singer that has focused on quality rather than quantity.

Clinton Fearon – Goodness
Yet another fine example of how Clinton Fearon and his Boogie Brown Band takes the reggae legacy into contemporary territory.

Black Symbol – Journey
A spiritual and sometimes meditative journey with sublime harmonizing and beautiful back-up vocals courtesy of Empress Bev. Her touch gives the album a character of its own.

Addis Pablo – In My Father’s House
Its 17 tracks takes the listener on a meditative, haunting and melodic roots reggae journey.

Gentleman – MTV Unplugged
The MTV Unplugged format was immensely popular in the 90s and I thought it was dead, but this album shows that it’s still very much alive and kicking.

I-Octane – My Journey
The culture and lovers themed My Journey is an entertaining and lively album filled with lots of energy, beautiful hooks and memorable melodies.

Ziggi Recado – Therapeutic
A little something for both body and mind.

Pressure – The Sound
Pressure’s fourth album and is his best to date. It includes the usual sweet arrangements and backing provided by Zion I Kings.

Nicodrum & Friends – Back to Fundechan
Music with a big heart, a solid pulse and lots of soul.