Land of the Blind is classic Zion Train 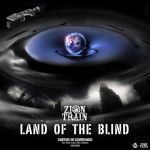 UK dub pioneers Zion Train’s brand new album Land of the Blind is classic Zion Train with its tasty mix of live instrumentation, organic arrangements and digital programming. And as usual the horns are superb being both melancholic and uplifting.

Zion Train celebrated 25 years in the business last year and this studio album features six vocalists, both fresh talents, like Jazzmin Tatum, along with Zion Train regulars, such as Fitta Warri and Dubdadda. It collects both new material and previously released tracks, cuts that have been released to wide critical acclaim.

Among the many highlights is the devastating seven minute long Dirty Dunza/Go For It with vocals from the fierce Fitta Warri and the more ethereal Jazzmin Tatum. The bass line on this track is just ridiculous and custom-made for breaking down the walls of Babylon.

Tranquillity Through Humility and The Great Flood/Gaia’s Tears come with a beautiful flute, while More and More and We Are Water are dreamy with smashing drums and dubby effects on the latter.

Fans of UK dub in general and Zion Train in particular will not be disappointed.

One response to “Land of the Blind is classic Zion Train”