Scrolls of the Levite is Mark Wonder’s best album yet 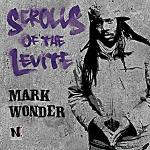 Garnett Silk-influenced Jamaican singer Mark Wonder, aka Dragon Slayer, has a fresh new album out. Scrolls of the Levite collects 13 tracks, including one dub version, produced by U.S. Nowtime Sound. And the result is an uncompromising and cohesive effort with clear hip-hop influences throughout.

The soundscape is often dubby and dread. The often emotional Mark Wonder signs praises of the Almighty, hails Jah and warns the youth against going astray. Onboard the journey is skilled hornsmen Dean Fraser and Nambo Robinson on saxophone and trombone respectively.

Best of the buch is the slightly offbeat Rude Boys in Town, the militant Buzzrock Soldiers with its infectious electronic instrumentation, Long Road, on a hip-hop-tinged version of Ras Michael’s mighty None a Jah Jah Children, and the haunting Rebels.

Scrolls of the Levite offers a tasty mix of beats and riddims with forward-thinking arrangements and song structures and its definitely Mark Wonder’s best work to date.