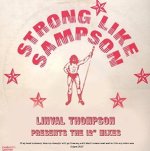 So, it was a beautiful Saturday morning and I was having a coffee while writing a record review. When the piece was finished my hard-drive crashed. The story was written in Office Word and I didn’t save. Why? I don’t know. I should have. I know. But I didn’t. End of story.

So to make a long story short – here’s a brief and less informative review, but it will still hopefully whet the appetite for yet another solid scorcher from UK’s Hot Milk Records.

Jamaican singer-turned-producer Linval Thompson released his material via a variety of labels, but saved his hardest pieces for his own Strong Like Sampson label, an imprint active between 1979 and 1980.

And for the first time his productions on that particular label have been compiled and reissued. We are talking about 18 tracks on two discs. Nearly two hours of some of the most uncompromising early dancehall to be put on wax. The fearsome Roots Radics do not apologize for their sparse and heavy as lead riddims.

And singers and deejays like Barrington Levy, Anthony Johnson, Rod Taylor, Sammy Dread and Papa Tullo take it directly from the grim streets of Kingston. Their lyrics are a reality check on police brutality and oppression.

All vocal cuts come with its dub or deejay version. And the material collected on Strong Like Sampson brims with dread echoes and streetwise energy.