Fresh and urban from Oriel

Dominican singer Oriel is productive. On July 2 he put out two EP’s. But that was however never the plan and the idea morphed after working with UK-based and Grammy-nominated producer Daniel Boyle.

Love SoulJah was slated for release and then Oriel teamed up with Daniel Boyle who remastered some of his previous releases, and they, together with a few new tracks, sum up Confidence 2.0.

The two EP’s are combined as one release on digital outlets, but they have a slightly different approach and sound. Love SoulJah is smoother and softer and deals with love and relationships, while Confidence 2.0 is deeper with a more social and political vibe. 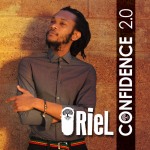 This combined set leans much toward pop music and it’s often easily accessible and catchy. Most cuts are however powered by brilliant bass lines. Check the country and western inspired Down Where I Live, the contemporary R&B flavoured Love SoulJah or album opener Confidence with its bulldozer bass line.

A fresh and urban set from an artist with great potential.