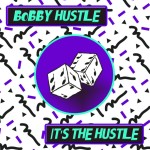 The U.S. reggae scene has been growing in the last couple of years, partly thanks to the thriving VI reggae scene with trailblazers like Midnite. They have for example had a great impact on the conscious sounds coming from the West Coast.

Bobby Hustle is from Seattle and part of the West Coast – or Left Coast as he puts it – reggae scene. He has been around for quite a while now and recently dropped his soothing debut album It’s the Hustle. It’s an eleven track set full of uplifting vibes, ganja smoke and infectious melodies.

Bobby Hustle likes marijuana. The weed is celebrated on no less than three tracks. He sings that he needs it to calm down. And judging from his incredibly relaxed and silky smooth singing style he probably uses rizzlas and chalwas quite often.

You are drawn into this contemporary reggae album. And the pop melodies, laid-back vibes and catchy choruses stick like glue.

Tagged as Bobby Hustle, It's the Hustle, Music, Reggae