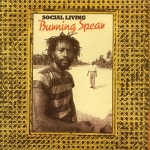 In the 70s Bob Marley & The wailers took the world by storm and he rose to global stardom. Bob Marley became synonymous with reggae and no other reggae singer or reggae band have even come close to what he has achieved.

But back in the days when Bob Marley was on his way to conquering the charts, labels were keen to find other acts to follow in his footsteps. Several tried, but no one managed. One who tried was Burning Spear, who – just like Bob Marley – was signed to Island Records.

Burning Spear started his career in the 60s; just as Bob Marley did. But his music was darker and rootsier from the beginning and Coxsone Dodd – who was the first to record Burning Spear – was at first reluctant to release the recordings due to its controversial messages and dread approach. Somehow, this draw the attention of Island Records who thought his music was for the masses.

Well, Burning Spear has recorded plenty of classics, but I think it’s fair to say that most of his albums and singles are far from commercial. His excellent 70s output for Island is slow, dark and dense and often lack hooks. His messages were regarded as revolutionary and Burning Spear often calls for repatriation and black consciousness set to a backdrop of smattering percussion, devastating bass lines and throbbing drums.

But Island believed in him and obviously still does since they only last year reissued his album Social Living, or Marcus Children as it was titled in Jamaica. This superb album is now expanded with another nine tracks when adding its rare dub counterpart Living Dub. And it’s the original version from 1978 and not the mixes from the early 90s that were put out on Heartbeat.

Social Living was Burning Spear’s second self-produced album and followed two albums each with Coxsone Dodd and Jack Ruby. It’s a coherent and accomplished set – and even more so with the added dubs – and presents Burning Spear at the peak of his career. It’s bold and edgy with plenty of spiritualty and references to the messages proclaimed by Marcus Garvey.