Tough rhythms on Dub in Blood 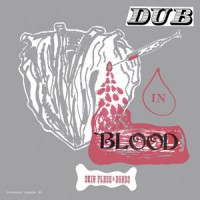 Band names in reggae history. That could easily be an interesting chapter in any thorough book about the reggae scene. The Aggrovators, The Revolutionaries, Roots Radics, Soul Syndicate are a handful of creative ones.

You also have Skin, Flesh & Bones. And their scarce Dub in Blood aka The Best Dub Album in the World from the mid-70s is the first release of 2016 on Pressure Sounds. It’s produced by Phil Pratt, recorded at Channel One and mixed by Ernest Hoo Kim and Ossie Hibbert and collects dub to vocal cuts by Al Campbell and Earl George aka George Faith.

It comes with the original ten cuts adding two bonus tracks to the LP version and another two on the CD edition. One of the bonus cuts is a dub of Al Campbell’s eerie Natty Band Wagon recorded at Lee Perry’s Black Ark studio.

Dub in Blood is naked and not loaded with studio wizardry. The tough riddims speak for themselves. And it’s definitely a solid and strong album, but naming it The Best Dub Album in the World might be exaggerating it a bit.

One response to “Tough rhythms on Dub in Blood”