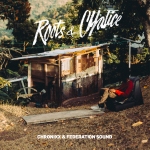 After a successful 2015 – performing with Major Lazer, Inner Circle, Joey Badass etc – Chronixx releases a killer mixtape in collaboration with Brooklyn’s own Federation Sound. This set follows Chronixx Start a Fire mixtape, produced by Major Lazer’s Walshy Fire and put out in 2012.

Roots & Chalice – which is available for free download – is slightly less eclectic and more vintage flavoured compared to Start a Fire and Chronixx voices a number of immortal riddims, including Prison Oval Rock, Cuss Cuss and I’ll Be Around. The mixtape also features several exclusive new cuts, such as Majesty, Spanish Town Rockin’ and Sell My Gun, along with guest appearances by contemporaries like Dre Island, Kelissa and Kabaka Pyramid.

Chronixx debut album is expected in the third quarter this year and judging by this excellent mixtape it might be a landmark set.

One response to “Blazing mixtape from Chronixx and Federation Sound”