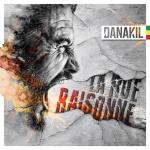 La Rue Raisonne is French nine-piece outfit Danakil’s fifth studio album since they started back in 2001. The first single off the album is 32 mars and it’s a groovy effort, while the second single Back Again is harder and darker with grim horn parts.

The album was recorded with analogue techniques and has a rough and organic feel to it with hard-hitting drums and bass lines, at times complemented by the use of dub wizardry.

It’s an album with tracks mostly sung in their native-tongue. But melodies and moods transcends langues and borders. And it’s a frustrated and angry album with a dense sonic landscape. You can almost touch the frustration on a track like J’attends le jour [I Await the Day].

Danakil has previously worked with a number of reggae royalties, including Jah Mason, Twinkle Brothers and Mighty Diamonds. For the closing track on La Rue Raisonne they have invited a big number of artists from around the world to join them, and World of Reggae Music features Natty Jean, Flavia Coelho, Yaniss Odua, Anthony B, Volodia, Josh from The Skints, Nattali Rize and Brahim. Quite a line-up.

An uncompromising album summing up moods that many people around the world feel today.

One response to “Uncompromising new album from Danakil”