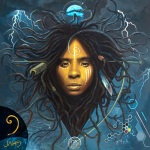 In 2014 Jah9 introduced new vibes to the contemporary Jamaican reggae scene. Her widely acclaimed debut album New Name was produced by Rory Gilligan from Stone Love and she was a fresh voice with an unusual sounding album. It was jazzy, soulful and slightly psychedelic with free-spirited consciousness.

On her new album 9 – the follow-up to New Name – she has collaborated with a bunch of new names. She is however the main producer of this thought-provoking set, but with help from Andrew Campbell, Bregt “Puraman” De Boever, Earl “Chinna” Smith, Akae Beka aka Vaughn Benjamin, Tippy I from I Grade Records and Zion I Kings and Franklyn Irving.

9 mm Vol. 2: Pre-Album Groundings was a mixtape that preceded 9. It was a blazing set that boded very well for the full-length. And 9 actually fulfills high expectations. 9 is the natural follow-up to New Name. Jah9 has carefully crafted this hypnotic and challenging album – check the nine-minute-long spiritual journey In the Spirit – and it balances consciousness and intellect with peace, love and unity.

With this album Jah9 continues to push musical and lyrical boundaries and it will be a journey to follow her future career.

2 responses to “Jah9 continues to impress on new album 9”