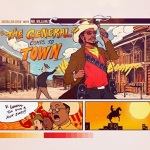 Mr. Williamz has joined forces with Green Lion Crew on the aptly titled album The General Comes to Town. A brutal ten track showcase set where Mr. Williamz is joined by veterans such as Dean Fraser, Lone Ranger, Joe Lickshot and Pinchers along with more recent talents like Addis Pablo and Gappy Ranks.

Every track comes with a version; either dub or another vocalist. Mr. Williamz’ flow is as usual flawless and the beats and riddims he rides are ultra-solid and rock-hard. Check for example Never See Her Again and – in particular – its haunting dub version The Robbery with wobbling bass and introduction by no other than veteran drummer Horsemouth.

Other standout cuts include the title track, which is a version of Ini Kamoze’s World a Reggae, and its spaghetti western themed version with melodica provided by Addis Pablo.

With this album Mr. Williamz and Green Lion Crew can tackle any sheriff. The town will be under siege when they drop these sonic bombs.