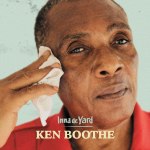 The project was a hit and groups and singers like The Viceroys, The Mighty Diamonds, The Congos and Kiddus I were on board. Several albums and singles were released via French label Makasound. Unfortunately the label folded and the project was put on ice.

Until earlier this year when Chapter Two Records, something of a reincarnation of Makasound, dropped the compilation The Soul of Jamaica, which was credited to Inna de Yard. The project was suddenly alive again and now another album has been put out. And the singer is no other than Ken Boothe, one of Jamaica’s greatest vocalists with a string of hits in the 60s and 70s.

Ken Boothe was featured on The Soul of Jamaica. His versions of Let the Water Run Dry and Artibella were two of the strongest cuts on the compilation.

His Inna de Yard set features another nine versions of some of his previous recordings; all recorded with acoustic instrumentation with nyabinghi drumming, horns and the occasional accordion. The versions are intimate and warm and the arrangements allow Ken Boothe’s gritty singing to shine throughout this stunning set.

A heartfelt and genuine album produced with love and care for reggae music.

One response to “Stellar acoustic album from Ken Boothe”