Kingston-bred singer Torch has been in the music industry for about ten years and already in 2005 he toured with the nowadays incarcerated Buju Banton.

Self Reclaimed is classic contemporary reggae with material recorded for a variety of producers, including Techniques Records and Frankie Music. It balances tough dubby sounds, such as Lion, with smoother efforts like Bangarang and the slick percussion-driven Africa Calling.

Another promising Jamaican talent to keep an eye out for.

A fifth remix EP from Sizzla’s Born a King

The forthcoming EP collects 13 different versions of Sizzla’s Cold War – eleven cuts of the original track and one version each from veteran singer Prince Alla and gruff dancehall deejay Bugle.

It kicks off with the original six minute+ original version followed by an acoustic version along with the cuts from Prince Alla and Bugle. From there on there’s an bass boosting extravaganza created by Mista Savona himself along with Empress Shema, Om Unit, Mat the Alien, HNGVR, Sukh Knight and 3rdeye.

Uplifting and conscious dancehall from Bugle 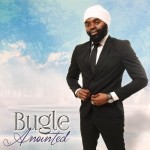 Jamaican singjay Bugle stands out in the dancehall community thanks to his socially conscious lyrics and sense for melodies. And some of his most popular singles have showcased his profound and soulful voice along with a sense for rhythm.

He started his career in the music industry in 2000, and got a break serving as song writer for the energetic dancehall deejay Elephant Man. But in 2007 things changed. That was the year when he teamed up with Serani for the infectious and highly successful single Doh.

This is actually a rather remarkable album with guest artists such as Tarrus Riley, Julian Marley, Lady Saw, I Octane and Popcaan. It’s conscious dancehall that blends acoustic guitar with electronic elements with great effect, and it has a large number of killer tracks, for example lead single Nuh Compatible, released late last year, and the Lady Saw combination Infidelity. But also Move Dem, with a beat custom-made for Damian Marley, the nynabinghi-flavored title track and the skanking Y R U, which has a crescendo to die for.

At times Bugle sounds like a less angry and more melodious version of Bounty Killer. Both have voices deep as the Mariana Trench, but Bugle is more harmonious and relaxed.

Bugle is probably best known for the aforementioned Doh or singles like What I’m I Gonna Do, Journey and Don’t Give Up, and if you dig those you’ll love this album.