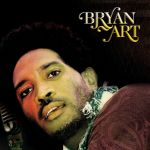 Jamaican singer and musician Bryan Art’s new self-titled album is an odd one since eleven of its 13 tracks are lifted directly from his excellent debut album 20ten, released three years ago.

The new album is put out on a different label and only includes two new tracks – the hip-hop flavored Capleton combination Dem Fass and the haunting Warrior King duet New Day. Both are however also previously available, Dem Fass as a single and New Day on the Reggaeville riddim compilation.

This repackaging is a dirty and sneaky way of getting exposure of already available material and it would have been better if the label and its marketers would have been upfront with this. Luckily enough the set is solid, since the cocktail of refurbished vintage riddims and original material is first-rate. So is Bryan Art’s soulful and husky voice.

He’s also a prolific songwriter and has penned for acclaimed artists such as Luciano and Etana. He’s also an accomplished guitarist, member of the Firehouse Crew and leader of Bushman’s backing band the Grass Roots Band. In other words – he knows what he’s doing.

However, some of the strongest songs are left out this time, and the weakest one by far – the flat house influenced No Malice – is annoyingly still around.

The best way to learn more about Bryan Art’s tasteful sounds is to get the debut album and the two singles. That’s all you need for now.

Bryan Art is now available on CD and digital download.

Bushman is the Bush Doctor

Tribute albums are not particularly common in reggae music. And I am not that fond the idea either. It is often hard to make justice to the original versions. But sometimes you get surprised. The new album from Bushman – Bushman Sings the Bush Doctor: A Tribute to Peter Tosh – is one such.

The late Peter Tosh was part of the original Wailers in the 60’s and early 70’s. But he and Bunny Wailer left and started their own solo careers. Peter Tosh had done some recording on his own prior to his demise from the group, for example Them A Fe Get A Beatin’ and Maga Dog for producer Joe Gibbs. He had also proven himself to be a great lyricist and songwriter in the Wailers.

I have always thought that Peter Tosh has been put in shadow compared to Bob Marley – of course – and Bunny Wailer. His first two albums Legalize It and Equal Rights are downright excellent.

Therefore I think that Bushman has chosen a great artist to pay tribute to. And he does it very well. Bushman’s deep, sometimes nicely nonchalant, tenor voice suits Tosh’s militant compositions very well. Bushman is not as rugged as Tosh, but it is compensated by sincerity and soulfulness.

Bushman Sings the Bush Doctor: A Tribute to Peter Tosh is mainly produced by Donovan Germain, always a safe card for great production. And this album is no exception. The production is warm and modern, but still close to the original versions. Maybe because some foundation musicians are involved.

Bushman has chosen 15 compositions for this album, mainly taken from Tosh’s’ albums in the 70’s. Some are expected, like classics Legalize It and Downpresser Man, while other choices are more surprising.

The bubbling disco groove in Buk-In-Hamm Palace is one of Tosh’s more accessible moments and Bushman’s version just toughens the bass line a bit. On the soul drenched and upbeat Don’t Look Back, originally performed by The Temptations, Bushman has invited Tarrus Riley, instead of Mick Jagger as Tosh did. Luckily enough the 80’s sounding sax solo is still with us.

Even though the track list is exquisite I miss tunes such as Burial and I am the Toughest, another of Tosh’s signature tunes.

This is surely a great album and an impressive tribute to one of the many greats of reggae music.