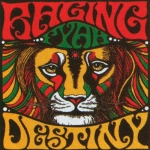 With the excellent single Nah Look Back Jamaican five piece band Raging Fyah took the acclaimed selector and radio personality David Rodigan by storm, and he put the single on his compilation Masterpiece, a double disc showcasing his formative years and what he believes could be the future of reggae.

Raging Fyah’s authentic roots-rocking reggae might well represent the future of reggae, even though their sound builds on traditional roots and the likes of Bob Marley, Peter Tosh, Third World and Zap Pow. Soulful and mellow with a contemporary flare.

Destiny – which drops on June 17 – is a captivating album with mostly conscious and uplifting lyrics about overcoming obstacles and fighting for justice and equality. There is however no raging here.

The melodies and the arrangements are beautiful and it’s hard not to get overwhelmed by a sweet piano ballad like Brave or pulsating non-stop rocking rockers like Barriers and Step Outta Babylon.

Their debut album Judgement Day was released in 2011, but didn’t have the proper distribution. So Destiny comes in a box with the debut included. And what a box it is. Powerful, yet sophisticated, and blazing, but cool. Acquiring this box is a no-brainer if you ask me.