A surprise attack from Dub Vision 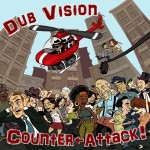 Roots veteran Don Carlos‘ backing band Dub Vision has gone solo and released their debut album Counter Attack with a bunch of guest artists – one of them being Don Carlos himself.

Dub Vision is based in California and the sun and beach vibes are apparent on several tunes, especially in Cool Summer, where the band’s lead singer Hodge’s soft, whispering vocal style flows over a sweet and well-executed riddim.

But the sun doesn’t shine at all times. The mood on tunes such as Trod On, Rebel Sounds and Extrication are dark and mysterious and rather have a feel of a cloudy and muggy London.

The musicianship is flawless throughout, especially the horn arrangements are a particular delight. The several instrumentals and semi-instrumentals give the horn players much space to elaborate on the melody and the mood. The trombone courtesy of Balboa Becker is superb and so is Malika Madremana’s vocals in Children of Israel.

Highly recommended for fans of well-crafted reggae and bands such as 10 ft. Ganja Plant.