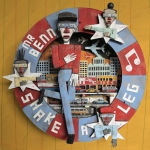 The UK city of Bristol is probably best known for groundbreaking trippy 90’s bands such as Massive Attack and Portishead. But the reggae scene has also been vital for many years, as shown by the many excellent albums and compilations coming from Bristol Archive Records.

One of the more recent additions on the Bristol reggae scene is Mr Benn, who on his debut album Shake A Leg takes an old school meets new school approach.

The album is an eclectic smorgasbord set with Aswad, The Specials and King Tubby along with various ingredients coming from 90s hip-hop and boom rap, soca, jungle, dancehall, dubstep and bashement.

This vast list of musical influences and guest artists, ranging from UK heavyweighters like Top Cat and Tenor Fly and to newcomers like Eva Lazarus and Nanci Correia, creates a cheerful jump-up vibe directly aimed at setting dance floors worldwide on fire.

And it’s hard to sit still when you play this entertaining album. Your head starts to nod, your feet beings to stomp and suddenly you feel an urge to dim lights, call all your friends and turn up the bass, even if it’s just a boring Thursday afternoon. Then just do it.

And don’ forget to check out the out the free download of a wicked combination with gruff voiced deejay Blackout JA, not included on the album.