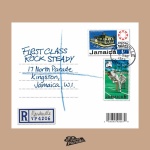 This comprehensive collection comes with timeless hits and ultra-rare gems showcasing the impact rock steady has had on Jamaican and popular music.

Rock steady only lasted for about two years – 1966-1968 – but is an undeniably influential genre with riddims that have been versioned and covered countless of times. The slow and melodious rock steady paved the way for the evolution of reggae and how it sounds today.

Sensational songs like Hopeton Lewis’ Take It Easy, The Techniques’ You Don’t Care and Alton Ellis Rock Steady helped to put Jamaica on the musical map and the music still sounds fresh today.