Tag Archives: From Joshua to Jashwah

Yet another long lost treasure from Bristol 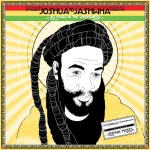 Bristol Archive Records has dug out 15 songs from the little-known Bristol-based roots singer Joshua Moses, who supplied the excellent Africa (Is Our Land), Rise Up and Stick it Up to the label’s compilation series Bristol Reggae Explosion vol. 1, 2 & 3.

The tracks on Joshua Moses debut album were recorded between 1978 and 2003 and are collected as From Joshua to Jashwha – 30 Years in the Wilderness. And prior to Bristol Archive Records’ involvement the only tune previously released was the hard to find Africa (Is Our Land) along with its dub counterpart.

Joshua Moses is a versatile and dedicated singer who can sing pure and clean as well as harsh and rugged. Or Curtis Mayfield falsetto style. Just listen to Suffering in the Past, Stick it Up or Children of the Light. Three styles, one singer.

Musically this is mostly – the odd country and western-influenced Distant Guns being the grand exception – roots reggae of the highest order with hard working, grinding bass lines along with pulsating organ work. Lyrically it’s in the same vein. Repatriation, universal unity, spirituality and overcoming suffering are some of the themes.

Out of the 15 tunes there are three dub versions and three live recordings and the sound quality is usually surprisingly good.

Just as several of the other lost tunes and albums dug out and released by Bristol Archive Records it’s a mystery why these tunes have been forgotten all these years. It has been 30 years, but Joshua Moses now hopefully gets the recognition he deserves.