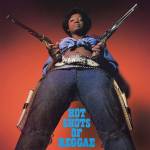 One of my all-time favorite compilations on Trojan Records was reissued late last year. Hot Shots of Reggae originally came with 12 slices of early stomping reggae produced by the late and great Leslie Kong.

Hot Shots of Reggae has never been reissued before and showcases some of Leslie Kongs most popular recordings, including hits like Ken Boothe’s Freedom Street, The Melodians’ Sweet Sensation and The Maytals’ Monkey Man. But the real treat on this album is The Gaylads’ glorious There’s a Fire, probably one of their best cuts ever.

The music on this compilation is just as striking as its sleeve.