The aesthetics of dancehall according to Wilfred Limonious

There are books about singers, groups, producers, music studios, music genres and technicians and engineers. But not much has over the years been written or published about the artists that are responsible for an integral part of the music business – the graphic designers.

The most well-known in reggae circuits is probably Tony McDermott who designed countless of classic sleeves for Greensleeves in the late 70s and early 80s. Then there is Neville Garrick who designed for Island Records, including immortal album jackets for Bob Marley and Ijahman Levi. 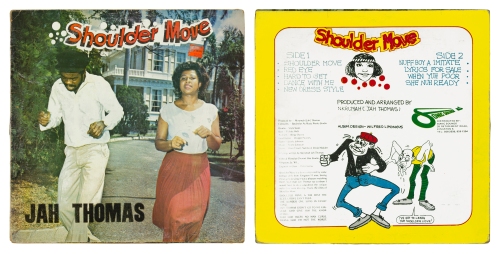 But there are of course others as well. And one of the most important is Wilfred Limonious, a Jamaican cartoonist that during the 80s became one of the key visual architects for dancehall album jackets and record-label logos. His outrageous humor and wit were perfect for this emerging new genre that challenged roots reggae with its more light-hearted and slacker sound and style.

His legacy has now been recorded in the massive and superb In Fine Style: The Dancehall Art of Wilfred Limonious. With this enlightning retrospective Christopher Bateman and Al “Fingers” Newman consolidate Wilfred Limonious’ role as one of the founding fathers of dancehall art.

Wilfred Limonious’ style is unique and sheds light on the primary aesthetics of Jamaican dancehall culture from the 80s. And what sets him apart from several other graphic designers of that era is his raw, scribbled and often stereotyped characters and hilarious and patois-filled social commentaries that can often be found in speech bubbles.

But the book tells a story beyond his graphic work for music producers. It also showcases other illustrations as well as his comic strips for Jamaican national newspapers. It’s an extensive and thorough reflection of a visual mastermind that skillfully interpret a cultural movement.