Relaxed and playful from Ernest Ranglin and Avila

The latest effort from Jamaican guitar maestro Ernest Ranglin – one of the masterminds behind My Boy Lollipop, the first ever ska-hit – is a collaboration with Avila, a group of top session musicians from South Africa, Israel and the U.S.

Ernest Ranglin is 82 years old, but is still going strong showcasing his smooth and warm guitar playing on this 16 track set titled Bless Up. The album was for the most part cut live with analogue sound and is reggae jazz at its best and includes Arabic excursions, jazz workouts, skanking ska, upbeat latin and bouncy African touches.

It offers loads of different rhythm structures, textures and flavors. But keywords are probably relaxing and playful. You have no idea what comes next and there are a constant flow of surprises throughout the set.

Bless Up follows several strong instrumental sets in the past six months or so – just check Nicodrum’s Back to Fundechan, Jaime Hinckson’s Take Flight, Jamaican Jazz Orchestra’s self-titled debut and Addis Pablo’s In My Father’s House, which is not completely instrumental though. Hats off to labels and musicians for gambling and releasing albums like these.

Third World All Stars’ Rebel Rock is easy to like 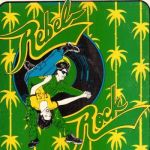 For Pressure Sounds’ latest reissue they step into somewhat new territory releasing the Third World All Stars’ instrumental album Rebel Rock, originally put out in the mid to late 70’s on Jamaican expatriate Count Shelly’s Third World label. The Third World All Stars were the house band, hence their name, and usually had a line-up of visiting Jamaican musicians plus local sessioners available.

Rebel Rock collects ten tracks and most of the riddims utilized were originally laid in Jamaica for Errol Dunkley’s album Sit And Cry Over You. This release has however been overdubbed in London adding lots of sweet and breezy horns credited to Rico Rodriguez on trombone, Eddie Thornton on trumpet and Michael Rose, Lester Sterling, Buggis Norman on saxophone.

It’s a commercially brave move to release an unknown instrumental album, even though it’s beautifully arranged, well-played and tight with bright melodies against and smooth and relaxed backdrop.

I celebrate Pressure Sounds for stepping out of the comfort zone and not repeat themselves with yet another Lee Perry dubplate compilation. An unexpected and very welcome release.