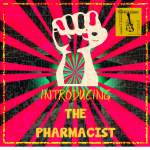 On Introducing The Pharmacist – produced by Mafia & Fluxy – this mysterious engineer has mixed 12 deadly cuts and some of them come with titles inspired by heavy drugs – Ketamine Dub, a medication used mainly for starting and maintaining anesthesia, Tramadol Dub, pain reliever used to treat moderate to severe pain, and Amitriptyline Dub, a drug to treat depression.

Some of the cuts on this lethal set come with extra all – sirens, laser beams, echo, reverb, delay and other audio effects that have been the preferred choice for dub engineers since the 70s. Other tracks are a bit more conservatively mixed with focus on the bare essentials – bass and drums.

They have rejuvenated several well-known riddims and the dub version of Johnny Clarke’s mighty Declaration of Rights sets the tone as album opener. It’s absolutely devastating with its haunting organ, Johnny Clarke’s echoing voice and rapid-fire percussion. It’s followed by yet another brilliant relick – Johnny Osbourne’s Truths and Rights, which comes with a hypnotic and spellbinding bass line powered by decades of ganja smoking.

If you need a more natural treatment for curing pain, anesthesia and depression check this album instead of going to the doctor.