Tag Archives: jah Is The Only King 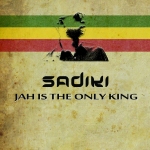 U.S. based reggae singer Sadiki is mainly known for his journeys in the lovers rock genre, and his third and latest album Jah Is The Only King is described in a press release as a clear departure from his previous sound.

But don’t let the title or a press release fool you. This album is not a clear departure from what he has been doing for years. Sure, there are a bunch of tracks with cultural or conscious topics, but the majority of the album is dedicated to romance and affairs of the heart.

Even though the album is mostly smooth as a baby’s butt, it’s a well-produced and well-sung effort produced by a number of people from around the globe – Kemar “Flava” McGregor from the U.S. Chris Peckings and Lloyd Mullings from the UK, Arena 026 Music from the Netherlands, First T & Kross from France, Enjoint from Japan and HearMeNow from Switzerland.

Sadiki has proven numerous times before that he’s an excellent vocalist, and on this album he’s as great as always. It’s soulful, powerful and sometimes it sounds like he’s singing while walking on eggshells.

There are several songs worthy of special attention, particularly Lovers Flight over Leroy Sibbles’ Break Up To Make Up, the motherly celebration aptly titled Mama, the up-tempo and patois intense Destiny’s Child and Live Some Life, which borrows its horn part from Susan Cadogan’s Hurt So Good.

Jah Is The Only King might not be the cultural set implied by the title, but when the material is as strong as these twelve tracks I don’t really care about titles or topics. It’s the music that counts.