U.S. reggae veterans John Brown’s Body is back with a new album following Kings & Queens and its dub counterpart Kings & Queens in Dub put out in 2013 and 2015 respectively.

This reggae outfit has worked hard criss-crossing across the U.S. ever since their debut album in 1996. Fireflies is their eleventh full-length and the band continues to create dense audio landscapes with gorgeous melodies. And one of the key components in their sound has always been the brass section and on Fireflies the horn trio blazes brilliantly adding plenty of nuances and sonic depth to each track.

The U.S. reggae scene has grown over the past years with successful artists and bands like Hirie, The Green, SOJA, Tribal Seeds and a host of others. And John Brown’s Body is an integral part of the U.S. reggae movement, but they are also responsible for having laid the foundation for other acts to grow from.

U.S. pioneering reggae band John Brown’s Body have had their latest album Kings and Queens, released in 2013, turned into an anthemic dub set titled Kings and Queens in Dub.

All of the original album’s twelve tracks have been reworked, mainly by North American producers and engineers, including Dubfader, Jay “Double Tiger” Spaker, Michael Goldwasser, Dubmatix, Ticklah and Nate Silas Richardson. But on board is also Yesking from Wales, Lord Echo from New Zealand and UK reggae legend Dennis Bovell.

The result is a mesmerising and swirling set with echo-laid grooves and a dense sound complete with infectious vocal hooks, courtesy of new lead singer Elliot Martin, floating in and out of the mix.

The original King and Queens is a progressive and innovative reggae effort and the dub version expands the sound with new audio effects and heavier bass lines. Highlights include album opener People in the Light Dub with its slow groove and hypnotic bass lines, the thumping Sound and Fury Dub and the dark Fracture Dub with its fanfare-like horns and aggressive drums.

Kings and Queens in Dub is an another vital addition to John Brown Body’s expanding catalogue of dynamic reggae.

The album collects a mix of upbeat tracks and slower jams rooted in late 60s and early 70s Jamaica. Most of them are dominated by a soulful guitar or a groovy organ and they are clearly influenced by bands such as The Hippy Boys, The Crystalites and The Dynamites.

Included on the set is the wonderful Castor Bean, the haunting Angel Trumpet and the Middle Eastern-flavoured Oleander.

10 Ft. Ganja Plant is a spin-off of the more progressive and psychedelic reggae band John Brown’s Body, and they have been making music for more than 14 years. And this beautiful instrumental series is a well-deserved addition to their more contemporary catalogue.

10 Ft. Ganja Plant has been around for more than ten years now. Quite long for a band that started out as a side project to the more progressive sounding John Brown’s Body.

The Plant is far from progressive. They have sounded more or less exactly the same since the debut in 2000 – reggae firmly rooted in 70s Jamaica.

Their ninth, and latest, set, Skycatcher, is recorded and produced according to the same delicious formula – a cocktail of warm and bass heavy vocal and instrumental cuts. It’s timeless with live instrumentation, a killer horn section, scorching organs and blistering harmonica. And the band’s members share vocal duties, which gives the album a nice diversity

If you’ve enjoyed the previous eight albums you will certainly not be disappointed with this ten track effort. 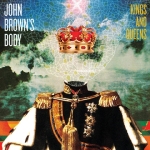 U.S. reggae pioneers John Brown’s Body’s new album Kings and Queens is the band’s first full-length album in five years, and just like its predecessor Amplify it debuted #1 on the Billboard Reggae Chart.

The album is the second set without Kevin Kinsella, one of the group’s founders. And former backing singer Elliot Martin now handles singing and songwriting and the result is a contemporary U.S. reggae album with dub-infused echo-laid grooves, poppy vocal hooks, startling horn lines and a dense, thick sound.

Elliot Martin has a strained, moaning and compelling singing style and his melodies are frustratingly infectious. On album opener Step Inside his voice is distorted and swirling around in the mix with a gripping result.

Some of the tracks lean towards rock music with power guitar and fast drum patters. Just listen to Invitation where it sounds like the drummer uses a double-kick-pedal, popular in harder forms of rock music.

John Brown’s Body has been around for close to two decades and has now dropped eight studio albums. But more importantly they’ve managed to evolve and update their sound and also been vital in putting U.S. reggae on the map.

Kings and Queens is now available now on LP, CD and digital platforms.

A posthumous album from the iconic Leonard Dillon

Leonard Dillon, Jamaican singer and front man of the influential reggae outfit The Ethiopians, passed in September 2011. His untimely death left the music world in general and the world of reggae with a huge gap to fill.

Happily enough U.S. Young Cub Records had recorded an album with him, an album that was posthumously released in March 2012.

Leonard Dillon paved the way for deep Rasta chanters such as Burning Spear and Joseph Hill of Culture with his rugged singing style as well as his honest, conscious and occasionally controversial social commentaries.

The Ethiopians started as a trio, but later became a duo. They recorded extensively in the 60’s and early 70’s and scored a number of smash hits, including the immortal rocksteady piece Train to Skaville, but also early reggae gems such as Everything Crash, Woman Capture Man and Hong Kong Flu for late producer Carl “Sir J.J” Johnson.

Due to the untimely death of Stephen Taylor – the other part of the duo – Leonard Dillon left the music business for two years in the 70’s, but came back strong in 1977 with the Winston “Niney” Holness produced roots scorcher Slave Call.

The live played backing is tight and bright with some nice brass arrangements, especially in Good You Do, which evolves into a dub version.

Leonard Dillon’s voice is darker than before and not as rugged as it used to be, and the fine-tuned vocal harmonizing by The Silvertones complements it nicely.

The Ethiopian is currently available on LP and digital download.

10 Ft. Ganja Plant continue to impress on their seventh album

John Brown’s Body is one of the most popular reggae bands in the U.S. 10 Ft. Ganja Plant comprises several members of that outfit, but their music leans more towards authentic 70’s roots reggae.

On 10 Ft. Ganja Plant’s seventh album – only one year after the concept album 10 Deadly Shots – they continue to impress with tight riddims and dubwise arrangements.

Shake up the Place contains ten tracks – always ten or eleven on their albums – with several prominent guest artists.

Sylford Walker, Prince Jazzbo and The Meditations certainly sound very comfortable. Sylford Walker is close to Burning Spear in the apocalyptic My Roots and Prince Jazzbo’s flow on the relevant Recession is an excursion back to the 70’s.

But Shake up the Place is more than great vocals. Several of the tunes are instrumentals and the musicianship is flawless throughout. Just listen to the harmony between the guitars, piano and organ in the title track or the trumpet solo in Ringers Rock. Pure gold.