Dark and harsh on Kalbata & Mixmonster’s Congo Beat the Drum

Kalbata & Mixmonster have with their debut album Congo Beat the Drum put out an album that builds on classic Jamaican reggae, while also adding contemporary aesthetics, making it both vintage sounding, yet progressive.

This Israeli production duo is probably not particularly well-known among reggae aficionados, since Kalbata is a house producer and Mixmonster has worked with funk band The Apples.

But for this album they went into their home studio in Tel Aviv with the aim of recording a 100 percent analogue dub and early dancehall album in the spirit of reggae greats such as King Tubby, Scientist and Henry “Junjo” Lawes. Their main instruments were a 16-track tape machine and a vintage analogue mixing desk. These were used when recording the live played and extremely tight riddims.

They brought their music to Kingston where they managed to voice some of their favourite singers and deejays – Puddy Roots, Little John, Major Mackerel, Tullo T, Mutabaruka, Trinity, Jah Thomas, Echo Minott and Prince Jazzbo, who made his last recording for this set.

Congo Beat the Drum is a grim, sparse and relentless eleven track set collecting two interludes, one instrumental and eight vocals. The title track is amazing tom-tom driven mayhem with Major Mackerel showcasing his eccentric delivery and on Amazing the under-recorded Tullo T gets in a fast-rapping groove. Truly remarkable.

Congo Beat the Drum is a dark and at times original sound system destroyer available on CD, LP and digital download. 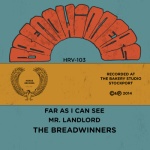 The Breadwinners – a one man show directed by a lad called Al – has dropped a discomix extravaganza on Horus Records. Far As I Can See and Mr Landlord recall mid 70s Jamaica and especially Lee “Scratch” Perry’s work at his famous Black Ark studio. Two raw vocal cuts by City Culture and Stevie are followed by their gritty dub and instrumental counterparts.

Prisoner in Love is the first singles taken from Kalbata & Mixmonster’s debut album Congo Beat the Drum, set for release on April 28 on vinyl, CD and digital download.

When recording the mellow and down-tempo Prisoner in Love Kalbata & Mixmonster aimed for getting the spirit of the late King Tubby and the early dancehall era of the late 70s and early 80s. For this purpose they used a 16-track tape machine and an old analogue mixing desk as their main instruments. 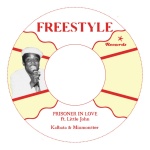 Little John’s singing floats easily on top of the dreamy piano and the deep bass lines. The flip is owned by Kutiman’s organ, who delivers a killer instrumental in proper old school Jamaica style.

Both releases are directly aimed at fans of well-produced and vintage Jamaican roots and early dancehall.