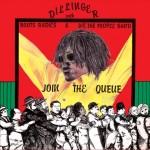 King Spinna Records – run by one of the founders of legendary label Blood & Fire – has just reissued Dillinger’s solid Join the Queue, originally released in 1982 on Oak Sound.

Dillinger is best known for his international hit song Cocaine in My Brain, but he was during the 70s also one of the leading deejays with his slick style. Join the Queue was released at a time when dread roots reggae was giving way for the more slack dancehall genre.

And this set captures the shift very well, with rock-hard riddims provided by Roots Radics and We the People Band. They contribute with five tracks each, on which Dillinger lays down playful, boastful and rootsy lyrics. He even slips in a bit of yodelling on Duddle Oley, unusal in reggae, but can also be heard on Tony Tuff’s Come Fe Mash It and Perfect Giddimani’s Never Fail.

After being out of print for the last 33 years this reissue is certainly very welcome.

Bunny Lee compilations are a dime a dozen these days and you have to be kind of careful since a lot of them just recycle a lot of already reissued material.

This all-singing affair is the vocal counterpart to King Spinna’s debut release Dub Will Change Your Mind, which collected all the B-side versions from this set, and the tracks included were originally released between 1975 and 1978. Lyrically and thematically they range from love songs to socially aware roots with all the singers proving themselves equally at ease with different styles.

Many of the tracks included are hard to come by and haven’t been included on any compilations or albums. For example Cornell Campbell’s excellent Gorgon A the Ginegog, Derrick Morgan’s Rasta No Fear, the next cut to his popular Tougher Than Tough, or Owen Gray’s I Man Naah Run. Included is also John Holt’s popular Up Park Camp, a tuned reissued and versioned to death.

Bunny Lee has during his many years in the production business worked with virtually every Jamaican artist of note and this compilation showcases some of the best talents Jamaica has to offer, but it also gives a nice taste of the flying cymbals and rockers sound.

Good News is now available on CD and digital platforms.

A new version of Blood and Fire Records

When the acclaimed Blood and Fire Records went out of business in 2007 it was a hard hit on the reissuing on long lost reggae treasures.

Four years have passed, and a few months ago it was announced that Bob Harding and Dom Sotgiu – formerly part of Blood and Fire Records – have started a new label – King Spinna Records.

Its initial release is a compilation of rare Bunny Lee dubs, and promises well for the future.

I got a chat with Bob Hardingon the phone  from his home about his new venture and why King Spinna will succeed in a declining industry. Read the full interview over at United Reggae.

In the press material for the first release on the newly established King Spinna label – founded by Bob Harding and Dom Sotgiu from the legendary Blood and Fire Records – it is stated that the market is saturated with albums of Bunny Lee produced dubs from King Tubby’s studio. That’s no exaggeration to say the least.

And that is why it is a sheer joy to listen to King Spinna’s Dub will Change Your Mind. Here is an album with genuine rarities never compiled on

It is concentrated around the period 1974 to 1978 and highlights the funky flying cymbals style pioneered by drummer Carlton “Santa” Davis. Throughout, the tough riddims supplied by The Agrovators are superbly rearranged with echo, reverb and delay by the talented engineer(s) at King Tubby’s studio.

King Spinna certainly follows in the great Blood and Fire tradition and offers sublime music that many people didn’t even know existed until now. Almost not Bunny Lee himself as stated in the press material.

Dub will Change Your Mind is initially released on vinyl in a pressing limited to 1,000 copies. Subject to demand a CD issue will follow featuring three bonus tracks. All tracks are currently also available for download from via the King Spinna website.