Message is key to Vaughn Benjamin

Vaughn Benjamin is front man and lead singer in Midnite, a group that has been instrumental in shaping a new genre within in reggae music called VI-reggae.

They recently released their latest album Kings Bell, their first set together with an Jamaican producer and with several prominent Jamaican musicians involved.

I got a chat with Vaughn on the phone about messages in music, his inspirations and why he allowed the group’s first music video. Read the interview over at United Reggae. 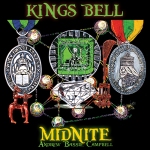 I must admit I haven’t listened to VI-reggae trailblazers Midnite much at all. They came to my attention only a couple of years ago, even though they have been around since 1989 and dropped their debut album Unpolished 14 years ago.

Maybe their vast production has been some kind of barrier. If you didn’t know – Midnite drops an average of around five albums each year. I have found 45 albums with their name on it. And that doesn’t include singer Vaughn Benjamin’s solo efforts.

Kings Bell is the title of Midnite’s fifth album in 2011. It’s their first full-length with a Jamaican producer, and it’s mostly recorded at Tuff Gong Studios in Jamaica with several acclaimed veteran musicians – Leroy “Horsemouth” Wallace and Earl “Chinna” Smith to name a few.

Producer Andrew “Bassie” Campbell has made Midnite more accessible than I have ever heard before. It’s still the same raw, hypnotic and weighty sound that Midnite is known for. And they’re still not flirting with the listener. The sing-a-long choruses and grand harmonies are still nowhere to be found. Midnite do their thing whether you like it or not.

But the sound is fuller and the melodic hooks are very much present.

The punchy bass lines are as usual also included just as Vaughn Benjamin’s intensive and rugged chanting style of singing. He sings with honesty and sincerity about religion and social injustice.

Kings Bell is perhaps also Midnite’s most varied set yet – the ska-tinged Torpedo and the percussion driven The Quickening are the two most telling examples, although not the crucial moments of the album.

Instead the highlights include Earth is the Lord with its relentless bass line that made my kitchen utensils shake and Black Mamba and Jewel inna Africa Horn with their memorable guitar licks.

I’m not sure whether this album will rocket the charts, but it certainly made me discover a new side of this individual band.

Kings Bell hits the streets on November 1st on CD and digital download.