A cohesive reggae and dancehall debut by I-Octane 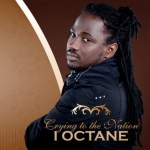 One of the most hyped albums in the last six months has just reached the record stores. I’m talking about I-Octane and his debut full-length set Crying to the Nation where he has partnered with Shaggy’s former manager Robert Livingston of Scikron productions.

I-Octane has been in the music business for about five years and has dropped several popular tunes in Jamaica and abroad over the last two years. Three of these are included on the new set – Lose a Friend, Nuh Love inna Dem and Puff It. Most of the other songs are actually new.

During the years I’ve followed I-Octane he has managed to voice both roots riddims as well as up-tempo dancehall scorchers. Crying to the Nation follows the same path.

But this album is more than just 16 dancehall and one drop tunes. I-Octane has successfully incorporated a certain dancehall edge to most of the tunes, both lyrically and musically. It might be his energetic and rough vocal style, clever song writing or focused production.

Ballads such as The Master’s Plan and the modern classic Lose a Friend will most certainly have a lighter or two in the air when performed live.

The faster paced System A Beat Them, with its tight drum and bass groove, and the sing-a-long friendly Tarrus Riley combination All We Need is Love, are among the highlights.

Crying to the Nation is a surprisingly cohesive debut and showcases an interesting and versatile talent with the ability to reach a wide audience.

Tagged as Crying to the Nation, Dancehall, I-Octane, Lose a Friend, Puff It, Reggae, Shaggy