It became a massive hit that year and was soon followed by two new cuts from the Wurl Boss – Clarks Again and Clarks 3 (Wear Weh Yuh Want) on the Wallabee riddim. At the same time the demand for Clarks increased in the Caribbean.

But this was not the first time Clarks had been celebrated in reggae. Dillinger had done it. Eek-A-Mouse too. But the best known Clark’s tribute up until Vybz Kartel’s anthem is Little John’s Clarks Booty released in 1985. And if you browse record sleeves from the 70’s and 80’s you’re bound to find Clarks. Just look at Dennis Alcapone’s Guns Don’t Argue or Michael Prophet’s self-titled album.

Street style has no boundaries and follows no rules. Converse is worn by punks and rockers all over the world, skinheads prefer Dr. Martens and Adidas Superstars was celebrated by Run DMC in the early days of hip-hop.

The story about Clarks dominance in Jamaican reggae and dancehall culture is fascinating since it’s a shoe partly synonymous with comfortable footwear for children and pensioners. It intrigued London-based DJ, musician and graphic designer Al Fingers so much that he recently put out a nearly 200 page book on the subject. 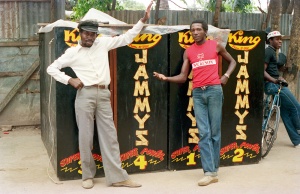 Pompidou and General Leon in King Jammy’s yard in 1986. Photo by Beth Lesser.

Clarks in Jamaica is a stylish and colorful photo-essay of Clarks’ celebrated status on the island, where Wallabees and Desert Boots have ruled dancehalls ever since the 60’s. But it’s also a lesson in general Jamaican fashion, social history and the importance of brands and brand values.

Style and fashion are integral to Jamaicans, especially in dancehall culture, and Al Fingers and photographer Mark Read tell the story from Clarks earliest years in the 19th century via its arrival in the West Indies about 100 years ago to today’s iconic status. 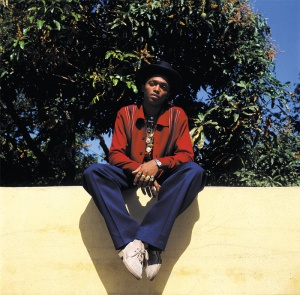 Triston Palmer in Kingston in 1982. Photo courtesy of Greensleeves.

It features current and historic photographs as well as never before-seen archival material and is based on interviews with veteran and contemporary artists and producers as well as industry people like Chris Lane and John MacGillivray from Dub Vendor.

Clarks in Jamaica gives interesting insights of how a comfortable shoe established in Somerset in 1825 could be the choice of rudeboy’s and Rasta’s. It also gives an exciting overview of Jamaican fashion and how Jamaican’s dress to impress.

What’s the recipe for its success? Check the book yourself, but it has a little something to do with simplicity, durability and price.

I currently don’t own any Clarks, but ten years ago I had around four or five pairs. When I read this book I suddenly felt an urge to address this problem and update my wardrobe.

Jah Stitch in Kingston in 2011. Photo by Mark Read.