Maxed out compilation from Maximum Sound

UK label Maximum Sound – run by producer Frenchie – has recently dropped a new compilation featuring a hefty 19 cuts originally released between 2014 and 2016. And it’s a no fillers, only killers, kind of compilation with an impressive line-up, including veterans a newcomers like Ninjaman, Samory-I, Morgan Heritage and Tarrus Riley.

Maximum Sound 2016 collects five different riddims along with a single and a few remixes. Best of the bunch is – with fierce competition – Ras Demo’s tongue twisting Sekkle Up the Score on the Armour riddim. Please don’t try this one at the local karaoke night.

Other highlights include Christopher Martin’s sweet London Queen on the Blueberry Haze riddim, Samory-I’s passionate Ride On on the recently released Royal Step riddim and Masicka’s furious The Youths on Clash of the Titans riddim.

As usual when it comes to Maximum Sound – everything is produced with care and affection. Give it a listen.

UK-based producer Frenchie of Maximum Sound has once again joined forces with renowned producer and mixing engineer Russ Disciples for another set of devastating slices of UK roots and dub.

Together the duo operates the Calabash imprint, a label devoted to hardcore UK roots, steppers and dub. And that is precisely what Calabash Selection Vol. 2 and its counterpart Calabash Dub Vol. 2 offer.

All tracks on the albums are played and mixed by Russ Disciples at his Backyard Studios. Some of the material have been previously released on vinyl, but the majority of the mixes differ from the originals. A couple of the riddims are also different compared to the previously released ones.

Fans of Maximum Sound and Russ Disciples will be pleased with this compilation. Russ Disciples has reworked several lethal Maximum Sound originals, including Tarrus Riley’s excellent Chant Rastafari, Luciano’s Perilous Times, on which he showcases some nice deejay skills, and Yami Bolo’s passionate Jah is the Fire.

The two albums doesn’t fully correspond with each other since the dub version has eleven and not nine cuts, but that won’t stop you from creating your own wicked showcase album using Spotify or iTunes. 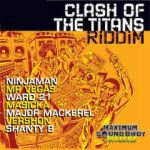 UK-based super producer Frenchie has teamed up with no other than the legendary King Jammy for a new scorching riddim titled Clash of the Titans, set for release on February 16.

This riddim is in the same blazing vein as the mighty Tin Mackerel riddim, released in 2013 with monster tunes like Konshens & Romain Virgo’s We No Worry Bout Them, Mr. Vegas & Natel & Major Mackerel’s Flash Up Unu Lighta and Tony Curtis’ Number One Sound.

Clash of the Titans is voiced by seven different artists – Ninjaman, Mr. Vegas, Ward 21, Major Mackerel, Shanty B, Vershon and Masicka – and comes with nine cuts, of which two are from Vershon and one is an instrumental.

More than a few sound bwoys were slayed by the Tin Mackerel riddim and with this one another dozen or two will face the same cruel fate. 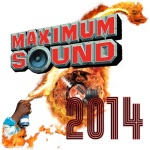 A new flagship compilation from UK-based producer Frenchie and his Maximum Sound label collects a whopping 18 tracks across six different riddims released over the past 18 months or so along with two exclusive bonus cuts – one from rising star Masicka and one from incarcerated dancehall don Vybz Kartel.

And a bunch of veteran and rising vocalists take turns on the microphone. Included are Maximum Sound regulars like Luciano, Tarrus Riley, Anthony B and Mr. Vegas, but also several up and coming talents, for example Loyal Flames, Jesse Royal, Randy Valentine, Dre Island and Exco Levi. As usual when dealing with tunes coming from the mighty Maximum Sound all singers are on top of their game.

Konshens and Romain Virgo are inspired on the up-tempo We No Worry Bout’ Them, and so is Randy Valentine on his smooth Victory and Loyal Flames on his dread Go Hard.

But you really can’t go wrong with any of the tracks on this compilation. It captures the essence of the contemporary reggae and dancehall scene with a little something for everyone, whether you are a roots aficionado, a dancehall connoisseur, a rocksteady enthusiast or just want to have a little bit of fun on the dance floor.

Included are also no less than two exclusive tracks. Both Vybz Kartel’s Ghetto Youth Make It In Life (2k14 Re-Fix) and up and coming dancehall sensation Masicka’s After Life have never been released before in any format.

Cuts of all of Maximum Sound’s most recent riddims are represented – from Jah Blessings, King Tubby’s Dub Plate Style and Imperial Crown to Tin Mackerel, Mightiest and Number One Station.

And as usual with Maximum Sound – all tracks are signed and sealed by the mighty Frenchie and were recorded between Kingston and London.

Maximum Sound 2014 will only be available via digital download.

Super producer Frenchie from the UK has three new riddims up for release on his Maximum Sound imprint, a highly reliable source for some of the finest contemporary roots and dancehall.

Then we have King Tubby’s Dub Plate Style. A vintage riddim and a cut to Bunny Lee’s Ali Baba riddim, voiced by John Holt and probably a few others too. This riddim comes with vocals by Gappy Ranks, Randy Valentine, Ras Demo, Captain Sinbad and Tony Curtis.

They are all coming out in early June on 7” and digital download. Check the promo mixes over at Youtube.

Mixtape madness on a Monday

Two blazing mixtapes were put out today – one from the well-respected UK label Maximum Sound and one from Suns of Dub & Walshy Fire, one third of futuristic dancehall trio Major Lazer.

The Maximum Sound mix is a 20th anniversary mix covering 95 tracks from 1993 to 2013 mixed to perfection by Gussy from Silver Star Sound. It collects a truckload of big tunes, for example Bunny General’s Spy Fi Die, Fantan Mojah’s Stronger and Captain Sinbad’s Worldwide Rebellion. If you need the full tunes – and you probably do – they are easily available as digital download on the compilation Maximum Sound 20:20. Meanwhile, listen over at Soundcloud.

The mixtape from Suns of Dub & Walshy Fire is a completely different affair. Suns of Dub is an ethereal two piece group consisting of the late Augustus Pablo’s son Addis Pablo and his partner Ras Jammy. They are the next generation of Rockers International and for this project they have some of their contemporaries onboard – Chronixx, Protoje, Kabaka Pyramid and Randy Valentine. But included are also legends like Bob Marley and Luciano.

Walshy Fire has treated the original material brutally. It’s a perfect mess mixing all things with a big, bad and bold bass. It’s a journey through dub, reggae, dubstep and dancehall via hip-hop, drum and bass and electronic dance music.

If you dug Walshy Fire’s treatment of Chronixx’ material from last year, you’ll need this one also. Listen and download via Soundcloud and check the full story behind the project over at LargeUp.

Looking for the best compilation this year? Well, you may just have found it. Maximum Sound 20:20 collects no less than 40 tunes from the mighty UK label Maximum Sound.

This 20th anniversary album celebrates the work of Frenchie, a French born producer who moved to London and started his career as an apprentice engineer at Fashion’s A Class studio in the late 80’s. But for the past 20 years he has run Europe’s number one reggae label – Maximum Sound.

Through this label – and a few subsidiaries – he has put out loads of rough and tough roots and dancehall singles, albums and riddims. He has also managed to voice a veritable who’s who in the contemporary reggae business, including Alborosie, Morgan Heritage, Bounty Killer, Vybz Kartel, Tarrus Riley, Mr. Vegas and Sizzla. Highly impressive for a European producer.

This 40 track comes in roughly chronological order and collects no fillers, only die hard killers – Junior Kelly’s Tough Life, Capleton’s All is Well, Bunny General’s Spye Fi Die and Captain Sinbad’s Capital Offence to name just a few. The latter is also a track that triggered a full album from the Captain, his first since the mid 80’s.

Maximum Sound celebrates 20 years, so it would have been a logical decision to choose only 20 tunes. But that wasn’t apparently enough. And I agree. Even though I could have gone for an even longer compilation.

Maximum Sound 20:20 is only available on digital platforms.

A decade of reggae greats from Irie Ites

French label and production house Irie Ites celebrate a ten year anniversary this year and part of the celebrations is a glorious compilation titled 2003/2013 A Decade of Reggae Music.

It collects 14 tracks on a broad variety of riddims and remixes, including Chezidek’s militant Bun Di Ganja on a relentless version of the Strange Things riddim, Ras Mac Bean and Morgan Heritage’s uplifting Lion is King, rock stone voiced dancehall deejay Bounty Killer’s Push Over on a version of the rock steady classic Stop That Train and Lutan Fyah’s catchy Take a Lick.

Irie Ites has together with labels and producers such as Heartical and Special Delivery put France on the reggae map. These three labels have put out some of the most consistent albums and riddims for the past ten years. And this compilation is together with Heartical Story Vol. 1 & 2 and Special Delivery’s The First Decade (2001 – 2011) a strong statement of the burgeoning and innovative French reggae scene.

In the history of reggae music it’s often referred to labels and producers in the so-called golden era, i.e. the 70’s and Bob Marley’s heydays. Lee Perry at Black Ark, Coxsone Dodd at Studio One and Duke Reid at Tresure Isle regularly pops up.

But there are of course many, many other key labels and producers, and one of the most important ones in recent years is Frenchie, who operates and owns Maximum Sound and its subsidiaries Calabash, Pull Up My Selecta! and the most recent addition Maximum Sound Bwoy Killers.

He has run Maximum Sound for 20 years and has put out a truckload of hard-bouncing dancehall and spiritual and relentless roots and culture, including Junior Kelly’s Tough Life, Fantan Mojah’s Stronger and Sean Paul’s Back Off. He was also involved in the creation of the world famous Diwali riddim and served as executive producer for Mr. Vegas’ breakthrough album Heads High.

Since it’s Maximum Sound’s 20th anniversary this year I had a chat with Frenchie about his career, the music industry and a broken fridge. Check the full story over at United Reggae and be sure to keep an eye out for an anniversary compilation dropping on September 16.