Milton Henry’s Branches and Leaves is a connection between generations 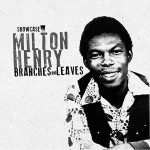 A few days ago I read an acquaintance’s status on Facebook. It read that he now had the reissue of Milton Henry’s Branches and Leaves in stock. Thing is that this particular album is not a reissue, even though it might both look and sound like it. The cover shows a shot of a young Milton Henry and the music is vintage 70s roots, so he can be forgiven for making such an easy mistake.

Milton Henry is not a particularly well-known reggae singer, even though he started as early as in the mid 60s and continued for about 20 years. In the 60s and 70s he recorded for acclaimed producers such as Joe Gibbs and Lee Perry and in the 80s – when he had settled in New York City – he recorded two albums for Lloyd “Bullwackie” Barnes. His biggest hit to date is probably a version of Curtis Mayfield’s Gypsy Woman, released in 1976.

Branches and Leaves is his third album and is done in collaboration with Roberto Sánchez – one of Spain’s leading producers and an expert in vintage recording techniques – and Lloyd Barnes. The vocals for the six tracks were taped in the U.S., while everything else was conducted at Roberto Sánchez’ A-Lone Ark Muzik Studio in Spain.

In classic showcase style the set is presented in a showcase style where each vocal cuts is directly followed by its dub counterpart. And the mixing is sublime, especially Rastafari Cannot Die and its version Branches and Leaves Dub, a song with a haunting bass line reminiscent of the mighty Drum Song riddim.

Milton Henry has a deep and soulful voice, a little like the late Isaac Hayes. It’s warm, but never heated or tempered. And the set overall is smooth, but never slick or polished. It’s low-key, but never boring or monotonous. It has great depth and lots of meticulously planned details.

Branches and Leaves stems from a connection between generations and two people with a love for vintage roots reggae. Reissue or not – this album echoes from a time that many people refer to as the golden age of reggae.

Available on gatefold sleeve LP and CD with excellent liner notes by Angus Taylor and lyrics to every song.