A rootsy introduction to Pablo Moses

In early 2017 legendary Jamaican roots singer Pablo Moses is expected to drop his first new studio album in seven years. And to increase interest in this singer a new best of album has recently been put out.

The Revolutionary Years 1975-1983 includes three cuts each from Pablo Moses’ first four albums Revolutionary Dream (1975), A Song (1980), Pave the Way (1981) and In the Future (1983). The first two albums are bona-fide masterpieces, but the quality drops slightly from there on.

Pablo Moses has a unique voice. It’s peaceful, high and cool and clashes nicely with his revolutionary and conscious words. The production on his first three albums were handled by Geoffrey Chung and his style is – much like Pablo Moses singing – slick and cool as ice.

There is hardly a dull moment on this disc. Yet I wonder why hit songs like I Man a Grasshopper and We Should Be in Angola – taken from his debut album – are not included. An oddity like the title track from In the Future could also have been left out.

But a cut like the militant Ready, Aim, Fire, or beautiful songs like Sister and A Song, certainly make up for those minor flaws. Get ready to (re)-discover Pablo Moses. 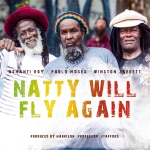 The album was recorded at Harrison Stafford’s own studio in California and later voiced at the legendary Harry J studio in Jamaica. It comes with a healthy 18 tracks – nine vocal cuts and nine dub versions.

Each singer has three songs each, and Ashanti Roy is the one that shines the brightest. Partly because he has the best and most interesting voice, but also because he has been treated with strongest material. His Hallelujah and Poor People almost sound like The Congos did in the late 70s – haunting and eerie.

Natty Will Fly Again is a testament that many seasoned reggae singers still have plenty to offer, even though it’s hard to outshine their efforts back in the day

Harrison Stafford brings together three veterans for first side production

On June 3rd Groundation’s lead singer and front man Harrison “Professor” Stafford presents his first solo side production – Natty Will Fly Again. It brings together three seasoned Jamaican vocalists – Pablo Moses, Winston Jarrett and Congo Ashanti Roy from The Congos. The album was recorded in Harrison Stafford’s own studio in California as well as at the Harry J studio in Jamaica.

The album collects nine tracks and is in a press release described as roots reggae with jazzy arrangements.