Old and new on Parly B’s This is Digital

UK MC Parly B first grabbed the mic on the 90s as part of the local jungle scene and it wasn’t until quite recently he burst into the dub, reggae and dancehall scene. He has recorded a number of tough tunes and several of them are now collected on This is Digital, an eight track set released via Mungo’s Hi Fi’s Scotch Bonnet label.

Two of the cuts are brand new, while six are previously put out different labels and for different producers. The audio landscape is dark and grim with dry melodies and bass lines echoing over oceans. And it suits Parly B’s authoritative vocal style very well.

The title track is an homage to King Tubby’s Firehouse label and was originally cut for Top Cat’s Herbalist and was latest heard on YT’s No Wata Down Ting. The brand new Duppy is produced by Greece’s Fleck and borrows the 19th century Russian folk song Korobeiniki widely known as the being the Tetris theme song.

Tagged as Dancehall, Mungos Hi Fi, Music, Parly B, Reggae, This is Digital 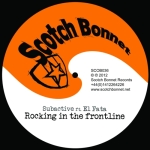 These bass heavy digital dancehall gems include debut releases from Tradesman and Subactive Sound System as well as a remix from Mungo’s Hifi themselves.

Tradesman has teamed up with Parly B on In a Competition, which collects a lethal version on the flipside.

Mungo’s Hifi take on the UK classic Your Love – originally cut by Michael Prophet and Ricky Tuffy. This remix stays true to its 90’s digital sound and the accompanying instrumental cries out for deejays to ride it.

Subactive Sound System’s cuts features El Fata, who last appeared on the label with his hit Mary Jane in 2007, and Ranking Levy, the main man from My Lord Sound. The vocals cover a range from sweet singing through fast chatting and cool and deadly deejaying while Subactive’s riddim track powers through on a heavy undulating bass line.