A big return for Morgan Heritage

The queen and the four kings in Morgan Heritage are back with their first album since Mission in Progress, released in 2008. Over these five years the five siblings in the group have focused on their solo careers with a varying degree of success.

Morgan Heritage started as an octet more than 20 years ago, but re-formed a few years later to a five-piece group. Here Come the Kings is their tenth album, an album where they continue waving the red, gold and green banner high and proud. Their version of pop-fueled and melodic socially conscious roots reggae is easy to fall in love with, and this album is no exception.

Here Come the Kings was preceded by the excellent four track EP The Return – which included the anthemic and rock-solid title track – last year and the heavyweight pop gem Perfect Love Song, released just in time for Valentine’s Day.

The vocal interplay between lead singers Peetah and Gramps is beautiful – Peetah with his sincere gospel-tinged style and Gramps with his deep and authoritative baritone. Here Come the Kings shows them in perfect harmony and most of the tracks are better than any of their solo projects.

Tunes like The Return, Ends Nah Meet, Man Has Forgotten and Holla are heavily addictive and after listening to the full album you just might have to check yourself into rehab.

Here Come the Kings drops on June 11 on CD and digital platforms.

A few years back the family-based band Morgan Heritage temporarily split up and members Gramps, Lukes, Mojo, Peetah and Una ventured into their own solo careers.

Gramps has possibly been the most prolific of the members and has produced himself and other artists as well as released two albums – 2 Sides of My Heart in 2009 and Reggae Music Lives in April this year.

I got a chat with Gramps on his latest album and the return on Morgan Heritage over the phone from New York City where he hosts a radio show. Check the full story over at United Reggae.

J Boog’s Let’s do it Again and Coldest Zone on Don Corleon’s Major and Bost & Bim’s Hustlin’ riddims respectively were two of the biggest highlights from last year.

And he has continued in the same strong vein ever since.

The smooth Waiting on the Rain and the bouncy I’m Fallen – again for Don Corleon – as well as the self-titled EP has all been strong efforts.

Now J Boog’s debut album Backyard Boogie has dropped, and the big question is if he can maintain his high standard and live up to the huge expectations. The answer is yes.

Backyard Boogie is a strong, often radio-friendly, album from start to finish.

It contains mostly exclusives and is generally in the modern one drop reggae vein with one excursion into ska – the Peetah Morgan duet Sunshine Girl.

J Boog is a fine singer with a hoarse yet soft ring in his voice. He is comfortable with both up-tempo cuts, such as the Million Stylez duet Replay on Bost & Bim’s Marvel riddim, or the R&B flavored Take it Slow, a tune reminiscent of Lost Without You by Grammy Award winner Robin Thicke.

Other highlights include the ganja anthem Hawaiian Pakalolo, built on Sly & Robbie’s Taxi riddim and utilizing lyrics from Josey Wales’ It Haffi Bun, and the Tarrus Riley duet She Give Me Lovin’ with its funky saxophone.

My fiancée summed up the album well the other day when she said “this is good music”. Agreed.

Bobo Revolution 2 even better than its predecessor 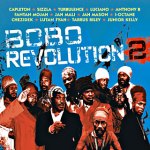 The liner notes of the second series of the Bobo Revolution compilation state, that label Maximum Sound “has excelled at making dancehall, vocals, deejay and roots records”. I couldn’t have put it better myself. I rank Maximum Sound and producer Frenchie among the best modern reggae producers.

The first Bobo Revolution was released three years ago and collected 21 massive tunes, ranging from Africa We’re From with Natty King to Show More Love by Turbulence.

The new Bobo Revolution also includes 21 cuts from well known singers and deejays such as Capleton, Sizzla, Chezidek and Luciano. And this compilation actually exceeds its predecessor. There are no fillers here, only killers. Not something I’m used to when it comes to compilations.

Bobo Revolution 2 offers nine well crafted rhythms, both originals and relicks, and all artists give powerful performances. The two that impress me the most are Turbulence and Jah Mason. Their songs are acoustic and actually work very well. Their fierce delivery contrasts nicely to the stripped instrumentation.

Some of the many highlights include Peetah Morgan’s Jesse James and Real Life by Jah Mali. It’s great to hear soul voiced Peetah Morgan over the rootsy Vineyard riddim, probably best known for Capleton’s All Is Well on his recent album, also included here. Jah Mali is an excellent singer that sadly has not done much recording in recent years. Here he proves that he has to step into the studio on a more frequent basis.

The only thing that might have done this excellent compilation ever better would’ve been dub versions to every rhythm. But nonetheless, I’m quite satisfied.

Holland has done very well in the world cup. Yesterday evening, the orange heroes defeated Uruguay with 3-2. However, it has also been great times on the reggae front for the Dutch. Ziggi Recado and Smiley has released good material recently and production team Not Easy At All was in part responsible for the acclaimed Judgement Time by Chezidek. And now label Rock N’ Vibes releases Genesis by Maikal X, his debut album.

And one thing is certain with Maikal X – he is a gifted singer with a good voice that is reminiscent of the late and great Dennis Brown as well as his adepts Frankie Paul, Luciano and Bushman. And he manages his voice well on this 14 track set with mainly one drop rhythms on live instrumentation.

Maikal X has already released one of the best tunes this year – Get Away – produced by Curtis Lynch on an updated version of the Police in Helicopter rhythm. This tune is unfortunately not included on Genesis. However, included are singles The Best in You and Here She Comes, a reggae version of Daryl Hall and John Oates 80’s classic Maneater. A nice version that will surely appeal even to the more inexperienced reggae listener.

The production is mainly done by Berteaut “Mr Rude” Fleming. It is smooth and polished and reminds of Don Corleon and Kemar “Flava” McGregor. And it’s probably no coincidence that the great Don Corleon has handled the production duties on The Best In You.

Lies borrow heavily from Coxsone Dodd’s classic rhythm Breaking Up and Born To Die is based on the powerful Collie Weed rhythm, released earlier this year.

Maikal X has also included three strong combinations – Peetah Morgan, Luciano and Irie Love. The duet with Luciano is a surely a nice tune, but the vocals are too similar. Perhaps it would have been better to include a singer with a different expression. The combo with Irie Love is bouncy thing with a 80’s flavour and the tune with the Morgan sibling is the albums strongest and well in line with Get Away.