Good times with The Green 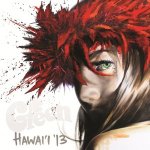 I’ve just had my first encounter with Hawaiian six piece band The Green. They’re part of the burgeoning U.S. reggae scene with successful bands such as Groundation, Easy Star All-Stars, Soja, Rebelution and John Brown’s Body. And Midnite of course. Even though they represent the Virgin Islands.

Their third album Hawai’I ’13 was recently released and it went straight to the top of the Billboard Reggae Chart and #77 on the Billboard Top 200 Chart.

And when listening to the 15 track set it’s easy to understand way. It’s easy accessible and just as appealing as a big scoop of chocolate ice cream on a hot and sunny day.

Some will probably dismiss this album and its fusion of reggae, pop and soul, with a slight touch of rock, as lightweight pop reggae. Well, yes, it is slick and it is as polished as a Wall Street bankers shoes, but that’s not necessarily a bad thing. Hawai’I ’13 is jam-packed with infectious melodies, skanking grooves, memorable hooks, beautiful four part harmonizing and sing-a-long choruses.

It can be a bit slick and sugary though. The piano ballad Chocolates & Roses is one such example. Luckily enough there are a number of standout tracks that will keep you interested – Good One and Something About It are two such examples.

Hawai’I ’13 is a positive album from start to finish and it sounds like a warm breeze on a beautiful beach. This is good times with a capital G.

In the summer of 2011 acclaimed German singjay Gentleman and veteran Jamaican singer Richie Stephens – known for his silky bedroom pop ballads – released Live Your Life. This partly acoustic, put your lighters in the air, reggaefied pop song was an immediate success, and so was its more dancehall-oriented follow-up Warrior.

These two hit songs encouraged the duo to do a full album titled after their debut single, and Live Your Life contains four other duets plus four individual tracks from each vocalist.

Live Your Life is adult soft rock and pop influenced reggae with hints of dancehall and rocksteady. Richie Stephens distinctive, warm and deep voice contrasts very well with Gentleman’s youthful and more energetic approach, especially in album-opener I Found Heaven which is reminiscent of late 60’s and early 70’s DJ and singer combinations.

This is reggae by the good guys for the wholesome moms and dads, and it’s well-produced and directly aimed an audience that doesn’t want any fuss with their reggae. It’s uplifting, but at the same time harmless and polite, even though I get a little upset when I hear the version of the stadium rock classic Drift Away, which has been versioned to death.

Live Your Life is for some reason a U.S. release only, and over there it’s available on CD and on digital platforms.

Diana Rutherford is a pop princess from the ghetto 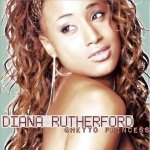 Diana Rutherford has made some excellent efforts on French producer SherKhan’s riddims in the past years. Now the pair has made the album Ghetto Princess together, an album that assembles 16 urban tunes.

But first things first. Ghetto Princess is neither a straight reggae nor a straight dancehall album. This is a popish RnB album with some notable exceptions. The dancehall excursion Hot Gyal is one such.

Ghetto Princess is rather in the same vein as Jason Mraz or Bruno Mars. But with a lot more attitude.

It’s radio friendly, stylish and often with infectious hooks and bass lines, even if the riddims and beats at times are minimal. Just listen to Caged on the Sufferah riddim.

Diana Rutherford sings with a sexy diva approach and with authority. She’s at her best when sounding fierce and angry, as in Beware, where she warns that your best friends are your worst. Or in the straight gospel tune The Treasure with its grand chorus and harmonies.

This album will probably disappear under mainstream radio’s radar. And that’s a shame. Several of the tunes would most likely appeal to a young urban audience that is continually fed with the latest Nicki Minaj, Flo Rida and Keyshia Cole.