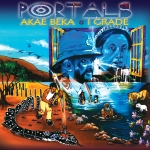 About a year ago VI reggae trailblazers Midnite suddenly cancelled a U.S. tour and stated the reason being “a life changing medical emergency, convictions and revelations”.

Somewhat cryptic, but then again Midnite and their front man and vocalist Vaughn Benjamin have never been interested in the spotlight unless being on stage. He rarely gives interviews and rather study or writes and records music.

Later a new outfit surfaced, a band led by Vaughn Benjamin. Akae Beka is their name and it’s taken from the Book of Enoch. Akae Beka first stage performance took place in October last year and their debut album Homage to the Land was soon put out.

Now their second set has dropped. This one on I Grade Records, a Virgin Islands’ based label that has been an important partner to Midnite in their career. The label is spearheaded by Tippy I and the new Akae Beka album is produced by Zion I Kings, a production trio where Tippy I plays a key part.

In the press release accompanying Portals it’s stated that Akae Beka isn’t Midnite reborn, but a continuation of Vaughn Benjamin’s journey. Fans can however stay calm since this album both musically and lyrically lie very close to what Midnite did.

This is spiritual and Rastafarian roots reggae with conscious and introspective lyrics emphasizing commitment to Jah, justice, equality and universal love.

Vaughn Benjamin’s vocal approach is an acquired taste. It’s raw, monotonous and non-melodic. His vocal style is in need of an otherwise melodic sonic landscape. Otherwise it’s too raw. Luckily Zion I Kings have provided Akae Beka with heavily-textured arrangements and melodies from the players of instruments, but without failing to include dense grooves and hypnotic bass lines. The horns on Orderly are for example sublime and the guitar work is superb throughout the set.

Portals is powerful and spellbinding. It might not be commercially viable, but it’s memorable and mesmerizing.