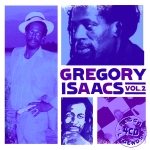 The late Gregory Isaacs is one of Jamaica’s most beloved singers, equally at home with both lovers and cultural material, even though his silky side is most well-known.

Over the years his material has been compiled over and over, and now it’s time again. But this new compilation is a bit different since it’s a box set that compiles four original albums with their original sleeves.

Two of the albums – Private Beach Party and Red Rose for Gregory – were smashes at the time of release, and collects game-changers such as Rumours and Mind Yu Dis. The two others – I.O.U and Victim – were also successful, especially I.O.U and the single Report to Me.

Three of the discs were produced by Augustus “Gussie” Clarke and singles such as the epochal Rumours and the smooth Let Off the Supm helped to revitalize their respective career. Hugh “Redman” James and Roots Radics were responsible for the underrated Victim, an effort that includes massive cuts like Rosie, Mr. Music Man and the title track.

Together these four albums give an extensive overview of Gregory Isaacs’ career in the late 80s and many of the tracks became stables in the Cool Ruler’s live set at the end of the decade.